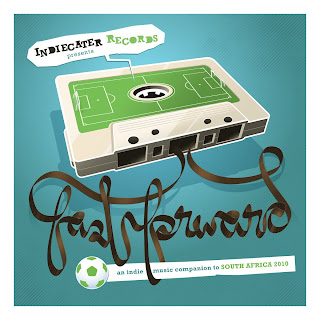 Indiecater Records have taken about the mammoth task of putting together a World Cup compilation, featuring bands representing in the form of song the 32 teams in this years World Cup. Thankfully most of them haven’t taken this too literally and have put forward a loose interpretation. Let’s see if we can get through them all. Cop On The Edge commence proceedings, representing South Africa with a fun cheesy tune, which sways a bit like Hammond led garage pop and reels off a list of notable South African sportspeople. According to the chorus they’re ‘gonna win the cup for Charlize Theron’. Mad claim undoubtedly, but a fun sunny pop tune anyway. Standard Fare give their song a Mexican tilt, but it’s not a patch on the top quality pop of their recent debut. It’s still good but a bit twee. Showstar provide a rabble rousing , while The Very Most have playfully called the French tune Irlande, and it’s another one of their sumptuous summery pop tunes. The Dirty 9s’ Ballad Of El Diego is suitably grandiose and a tad operatic in its celebration of , with a little of The Divine Comedy at their most knowingly overblown. Grand Pocket Orchestra’s is fantastically like a drunk version of something from The Lion King. The South Korean song is Pearse McGloughlin’s quite beautiful rolling piano ballad Jongmyo Shrine, while At Last An Atlas do a pondering electro buzz tribute to , a bit like The Research being quietly electro shocked. Detox Cute’s song is suitably twee and toothless and Boca Chica do a lovely French sung Algerian song that combines flute and a walk by the . It’s very bohemian and delightful. Lightholler do in a misty eyed European movie way, Betty and the Cavalero do Meet Me At The Red Light for as a gentle squeeze like Duke Special and Sleep Good’s is an instrumental bouncy Saint Etienne. Hunter Gatherer’s buzzes with the intent of a darkest industrial electro thing, but never really carries through its threat. The Invisible Clock Factory do , in a similarly minimal but unexciting way. Their way is repetition why is cool, but nondescript. Burning Codes present Holland as a half hearted spiritual, Cleemann’s Princes Of Denmark is a wonderful soaring alternative eighties pomp tune and Goatboy give us a squelching romp for Japan. Spirit Spine’s song continues the instrumental theme, a rousing glitch fest bringing it home. Le Man Avec Les Lunettes do a gorgeous summery twirling Sufjan Stevens style thing for , while Harry Bird does as a baby Bob Dylan. Adam and Darcie do some swoonsome girl pop for New Zealand and Escape Act’s Slovakia evokes a trip to the host nation in an updated by Paul Simon kind of way. Someone Still Loves You Boris Yeltsin do in their alt folk way, but it sounds tossed off at a minute and half of little in the way of ideas. Francis Bacon’s Ghost do a suitably dark and sinister reeperbahn slow trudge in the form of Kim Jung II for North Korea, Storkboy Choons provide Ivory Coast with a rattling lights housey instrumental and Tap Tap represent Portugal with strained vocals and a brittle tune, but a lovely happy melody and some squirming guitar lines. The Yellow Melodies Spain song is like power pop early Beatles, while Candy Claws ethereal Swiss tune, is a bit too featherlight to carry anything off. My Brother Woody do in the style of Athlete and a band that have never heard of football before and got their thoughts about it off the internet. Finally Manwomanchild provide an excellent climax in the style of a europop Denim as a tribute to . What seemed an expansive and ambitious project has reaped dividends in a big way.

Fast Forward: An Indie Music Companion To World Cup 2010 is out now on Indiecater Records and can be bought from their website