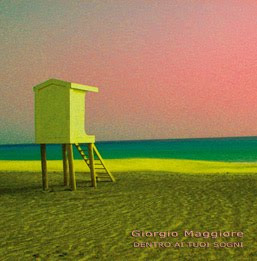 Milan based Giorgio Maggiore sent me his third and fourth albums, and this one is his third from 2007. It starts with the windswept understated mod of Bagliori Di Luce. The plodding, discordant at times, Illustre Sconosciuto is funereally drab, ghost like and eternal. It picks up a bit around seven minutes when the vocals come in, intoning sombrely and making things more downbeat, but more complete. Divertente is a slow motion electrical storm and a spooky face at the window, while Mi Ascolterai? is in a very similar vein too. Il Sogno Infinito is tinklingly gorgeous and sparse, a sprinkling of snow over the landscape. Il Tuo Flore Vero is like some eighties alt band gone minimal in the African desert and to finish proceedings La Grande Bolla is a drunken epic, where ten minutes pass slowly indeed.

Giorgio Maggiore's website is here and myspace is here