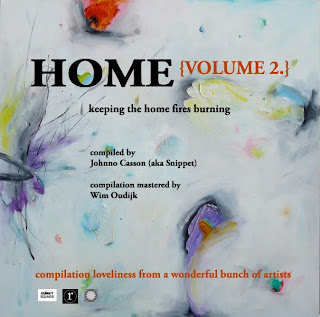 It’s a difficult task putting together a compilation album, but after the musical success of Home Volume 1, Rash Records are having another go at it. It is a pretty mixed bag, but as it is free to download, it’s definitely worth the few clicks effort.

First up Toodar’s song Toy is a pleasant noodle and squiggle that improves on a fairly basic acoustic tune. The Poems singer has a delightfully rich country voice, and Can You Come For Me sounds like Jealous Guy drifting across the plains. Sweet harmonies abound on Orwell’s I Need A Friend, like the delightful Teenage Fanclub. We Have The Right To Starlight by Cult Of Wedge glistens like an amateur Kraftwerk, while No One In Particular by Bobby Wotnot and Snippet is like a trippy White Town. The Men From Delmonte produce She Was Beautiful, a repetitive spoken word, ambient piece, like Little Fluffy Clouds for the downbeat thoughtful set. Louise Le May’s effort Cassandra is rather odd, like Tori Amos doing some bland piano based showtune, but it’s also rather touching and endearing. Whispers by Mr Fogg is pleasant enough, even though it is just emotive singing over a squelchy synthesised tune. Decent, but not groundbreaking. Testbild tinkle nicely with All Of The Fishes, Wim Oudjik is way out of place with some old dancehall reggae that clashes with beatboxing and Hawaiian shimmies to make it the best thing so far. Make You Happy by Better Fires is rather gorgeous. It’s a simple tune, with some delightful female vocals, like Laura Marling but with more warmth. Butterfly Perception by Mank is a noodle from a lost film and finally we get the stupidly named Tim and Sam’s Tim and Sam Band with Tim and Sam. Their Choices threatens to be a lovely sumptuous big sounding alt folk thing, a bit like Sufjan Stevens, but never really takes off.